In one quick slice the goats head tumbled to the floor with a spray of blood, and a thump.  Its body hit the ground with death still dancing its macabre jig through nerve and muscle tissue.  I watched as one of the Hindu priest's helpers picked up the head and carried it to the idol of Shiva placing it in offering.
I looked at the corner my companion and I had left our shoes, it now had a red river of blood spilling towards it.  I looked at the second goat being bought forth. I looked at my wide eyed companion Filbo.
I had just wanted a nice relaxing night back at the hostel to recover from my birthday party/pub crawl the night before.  Instead Filbo talked me into going out exploring with him.  So here I was watching three goats lose their heads in a hurricane of music, dance and free pasta. I had only met him the night before, but all of this was Filbo's fault.


I had arrived in Kuala Lumpur or KL for short in the afternoon of April 26th.  I took a cab to my intended hostel  KL dorms 2.  It was a relatively new hostel that had been getting good reviews on  hostelworld.com my go to for finding good hostels.  Upon check in I discovered they sponsored a pub crawl a couple nights a week the next one was on Thursday April 27th, my fortieth birthday.  Right away I knew I was going! 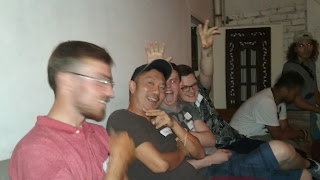 Filbo is the blurry one with the beard

The one thing you have to know about Malaysia is that it is a predominately Muslim country, a mostly tolerant and secular country, but a Muslim country.  Devout Muslims do not drink alcohol, but KL being like any other major city in the world is packed full of bars and nightclubs however the alcohol is expensive by Malaysian standards, in fact cost wise its on par with most American cities outside of LA and NYC.  Which meant I was going over budget, but if there is one day to go over budget its your 40th birthday.

9pm was the appointed time, it came and went and the group of Englishmen, me and this quiet German guy were still waiting, finally a rather disgruntled hostel worker came out and led us down the road to another hostel were he dropped us into their care where we ended up waiting yet again.  That's when the real conversation started and I was first introduced to Filbo Frensch.

A young 23 year old bearded (all the best guys have beards) bicyclist from Cologne, Filbo was on a far greater adventure than the one I had just started.  All ready on the road for 14 months Filbo had been riding his bicycle across Europe and Asia venturing through exciting countries like Iran and Myanmar.  He was making a pit stop in KL before heading on to Indonesia and eventually Australia.

Together we followed the crawl as it wound its drunken way through the neighborhood.  Sure there were other interesting people and the conversation flowed even more than the expensive alcohol.  But it seemed like we kept gravitating towards each other on that fun blurry night.  Which is probably why it was so easy for Filbo to talk me into going out with him the following night when all I really wanted to do was veg out in front of the hostel Netflix. (YES THEY HAVE NETFLIX!)

We started just randomly walking one way looking for an interesting place to eat.  After a bit of wandering we started hearing this weird but interesting music, Filbo got on it like a bloodhound and wouldn't let go until he found his fox.  He eventually located a partially hidden staircase and against my better judgement I followed him up the steps to the music up top.  What we came across was a religious festival, although interesting I wasn't comfortable with crashing or offending anyone else's communion with the gods.

I was about to tell Filbo that maybe we should go, when we were invited in.  After removing our shoes the both of us were led over to a picnic table and given a big plate of pasta and a coffee.  To my eternal shame I can't remember any names as I failed to write them down.  What I do remember is a discussion one member had with us about religion.

After our meal we were led back to the music, dance and goat slaughter.  The next two goats went the same as the first, except, (and I admit my eyes could have been deceiving me) after decapitation the last goat winked at me. Almost as if it was trying to say "Welcome to Malaysia, welcome to forty."

TravelTrav
I'm just a man in love with the world and its people, Follow along as I travel through Asia and Europe starting April 18th 2017!